In response to kremlin efforts to recreate the soviets, the Hutsuls developed a plan for expanding their territories. They didn’t limit themselves to modesty and so they started to explore the space. They began with the program for exploring Mars.

Later on, the program “MOLFAR” started; it was directed to deep space. Only Molfars, the Hutsuls with special skills, were sent for this program. A kind of Jedi.

They created a special spaceship “Kosiv” based on the Ukrainian rocket “Zenit-2”. 540 Ivan

Vyhovskyy surface-to-air missile regiment is used as a cosmodrome. They depart from Kamyanka-Buzka, Lviv region.

The Hutsuls have stopped the cooperation in space matters with russia, however, they cooperate fruitfully with Brazil, the USA, Japan, China and India.

The spaceship is flying through the Hutsul Way and approaching Saturn. The men have taken sheep on board. If they settle in the space, the Hutsuls will take other animals there.

The expedition has been going on for about 7 years. A lot of things have changed during this time. The Molfars’ second expedition “Wjo na Mars” has been successful, so now we have the first Ukrainian settlement on the Red Planet – Nova Vorokhta in Martian Hutsulshchyna. Not only women emigrated to Marsiyshchyna but also the first kids have been born. So there have been enough weddings and dances. And oh my gosh! There is also a great deal of sheep. All Martian meadows are covered with sheep and Martian herds as far as the eye can see. It is hard work to look after the sheep for them not fly away due to space winds, and not to jump into the outer space yourself. That’s why the space herds are the most powerful among the molfars and the most enduring participants of the space program. For sure, they even managed to make friends with local guys. Although they are green and not much talkative, there have been no issues the Hutsuls could not solve with the help of bimbor or a piece of bryndza. In fact, bryndza turns out red here (perhaps, there is something with the soil), but it does not matter because it is as tasty as on Earth; and it can be stored longer :). So, we have harmonious relationship and mutual understanding with the Martians. 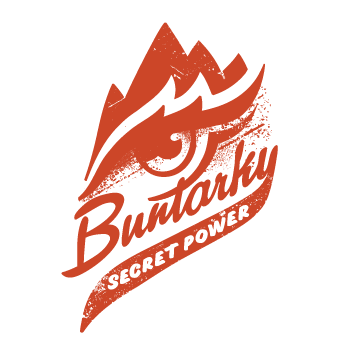 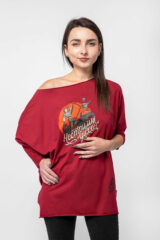 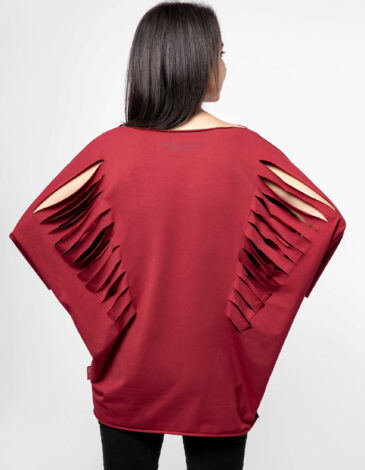 Aviatsiya Halychyny
AH_10ae6198-e629-11eb-9ba1-ac1f6b742a2b Buntarky are always ahead. They mean both the spirit and the wings which are always with you. This is the mood of our new women’s T-shirt “Unrestrainable in spirit”. There, the wings are hidden in the very design. There are cuts on the back also resembling wings in from. On the front, there is a large print with an inscription “Unrestrainable in spirit” («Нестримні духом») and a Buntarka near the aircrafts. A vivid cerise T-shirt with a mood of flight. 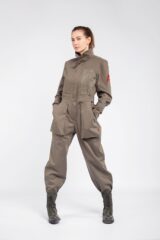 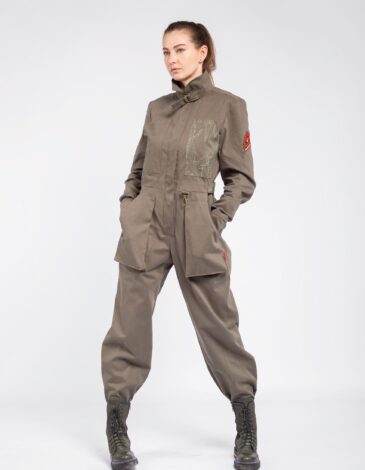 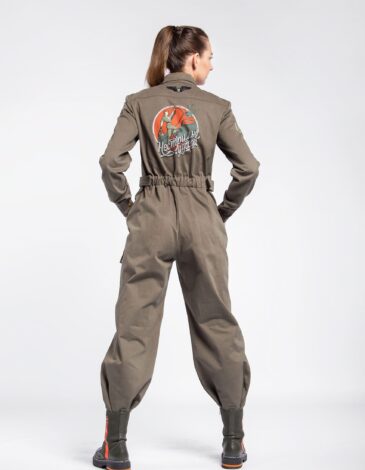 Aviatsiya Halychyny
AH_fa3ff649-cdca-11eb-a236-0cc47a40fa97 Perhaps, these are our most rebellious and aviation-related women’s jumpsuit we have ever created (or maybe, in the whole world). Comfortable and stylish, extremely similar to a real jumpsuit of carrier-based aviation, but more beautiful, of course. There are large front patch pockets on the chest and on the pants, strings from the sides to fit it comfortably to the waist; the jumpsuit is a bit tightened on the waist from the back for a better fit. The main embellishment of the jumpsuit is a large bright print on the back. A kind of a Ukrainian pin-up about Ukrainian women – stylish, strong and determined, unrestrainable in spirit. 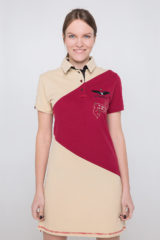 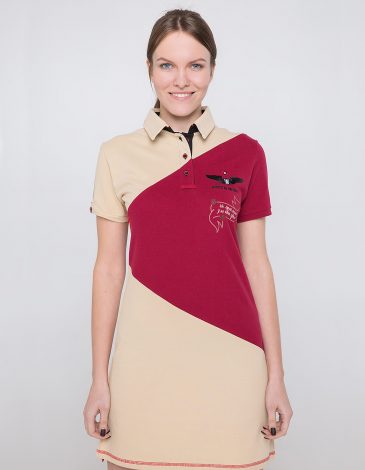 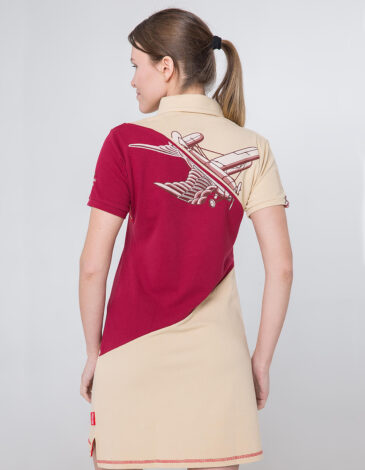 Aviatsiya Halychyny
AH_aff0a996-8a97-11e8-a20f-0cc47a40fa97 Polo dress in the colors of sunset: melange and red. Slim fil and comfortable; suitable for warm interseasonal as well as for hot weather thanks to the breathable fabric and comfortable ventilators. A fantastic half-aircraft and half-swallow is imprinted on the back; witch spells are placed on the front, just below our logo. Harmony of form and content. See more women's dresses in the catalog 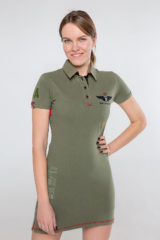 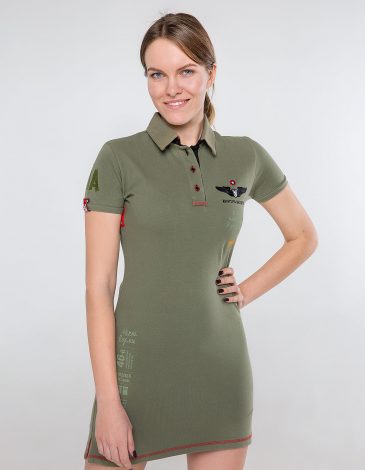 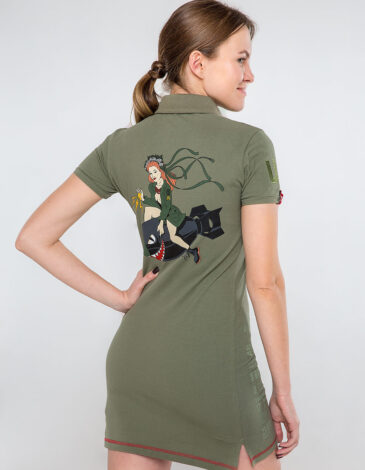 Aviatsiya Halychyny
AH_64fe2678-64ed-11e9-a21e-0cc47a40fa97 A witch is not only threatening but also stylish. That is why hundreds of men were ready to sacrifice themselves for witches at different times. An extremely elegant polo dress in khaki color. Perfectly suitable not only for summer but also for early autumn or late spring. With little slits and ventilators. On the left side of the chest there is an embroidered logo of Aviatsiya Halychyny. The witch spells are inscribed below. This is how we get charmed. On the right below there is short information about the women’s aviation regiment “The Night Witches”. There is a print on the back, a kind of a Ukrainian pin-up. This is exactly what a true Ukrainian combat witch who can make it hot to the enemy should look like. See more women's dresses in the catalog 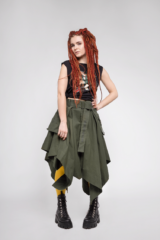 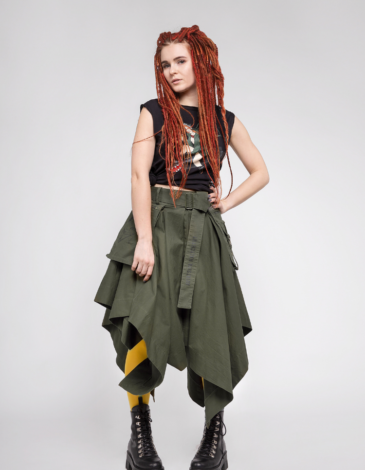 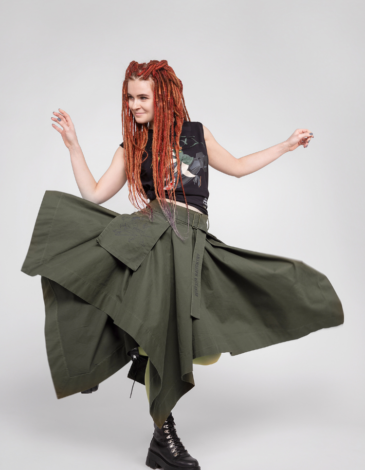 Aviatsiya Halychyny
AH_57e50fe0-7cf0-11eb-a234-0cc47a40fa97 Spells have always been the secret weapon of female molfars and witches for all times. In today’s world, clothes can even become a kind of a secret spell, depending on the purpose :) We have an extraordinary but even more interesting skirt. Bold in spirit, it can be worn for both office and a party, and someone might even choose it for mountains. It has an asymmetrical and fairly loose cut, two super comfortable pockets and a belt. It is decorated with prints from our collection “The Night Witches”. Claims the title of a secret weapon :) 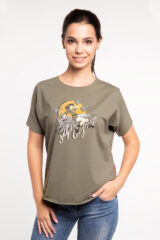 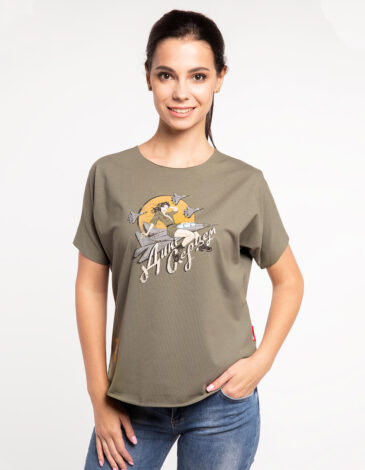 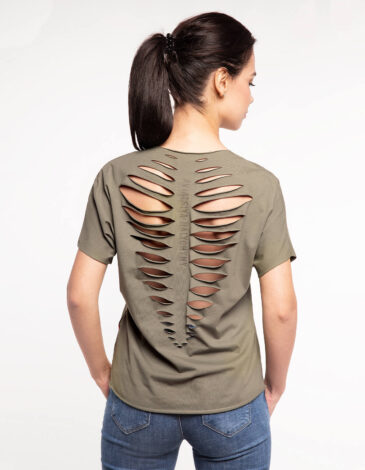 Aviatsiya Halychyny
AH_85c49b73-fd78-11ea-a231-0cc47a40fa97 Aviation and all the things connected with it is not only about strength. It’s about beauty, romance, and also a bit about magic. In general, for those who feel the unbridled energy in their hearts. Our new, different in mood and design, women’s T-shirt-blouse in khaki. Simple and elegant; its cut resembles wings. Comfortable slits on the sides give extra exquisiteness to the silhouette. There is a large print on the chest that depicts a kind of an aviation witch riding the Su-24 aircraft. New times require new witchcraft – our major secret weapon to defeat the enemy. See more women's t-shirts in the catalog 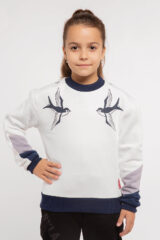 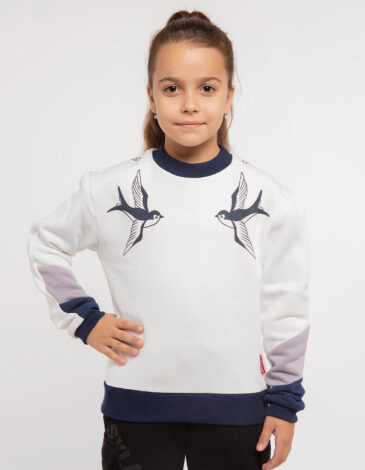 Aviatsiya Halychyny
AH_a92d9657-5ca2-11ea-a22a-0cc47a40fa97 We have one of the most romantic kid’s sweatshirts with swallows. A swallow has always been a powerful symbol of fortune and quickness. So there are four of them on the hoodie – two imprinted on the front and two on the back. It has extraordinary sleeves with touches of gentle lilac color. In general, the sweatshirt is designed in “marine” colors: the cuffs are navy blue and the base is mélange. See more kids sweatshirts in the catalog 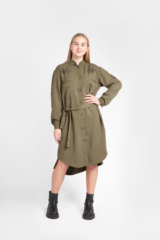 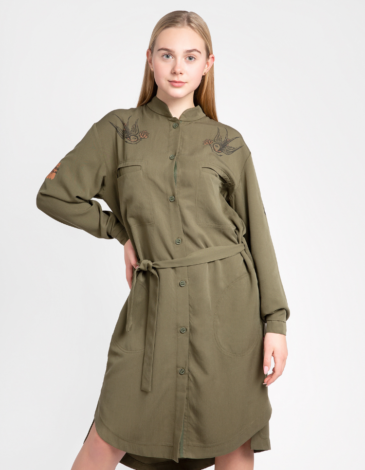 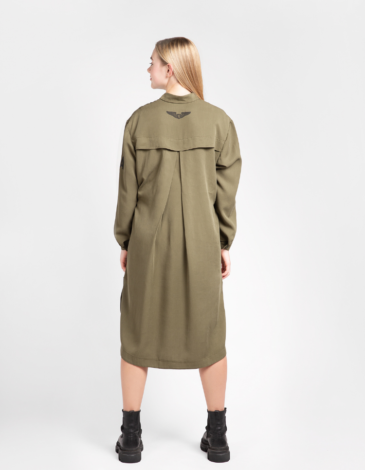 Aviatsiya Halychyny
AH_76744137-eb50-11ea-a231-0cc47a40fa97 A true wintch’s camouflage. Something in the middle between a uniform and a dress. In fact, it is an elegant long sleeve shirt dress in khaki with comfortable large pockets on the chest and on the bottom, with a belt that allows you fit it to your facny. The upturned collar gives some extra restraint, and the embroidered swallows – lightness and delicacy. Apart from these, there are few other decorations: the inscriptrion “The Night Witches” on one shoulder, the patch “UA” on the other one and our logo on the back top. There is something mythical and mysterious in that dress. See more women's dresses in the catalog