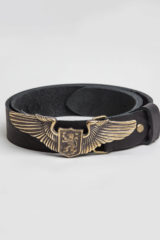 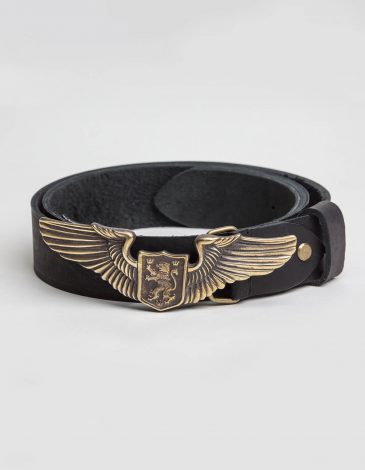 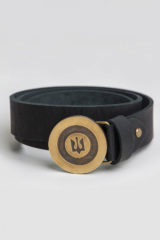 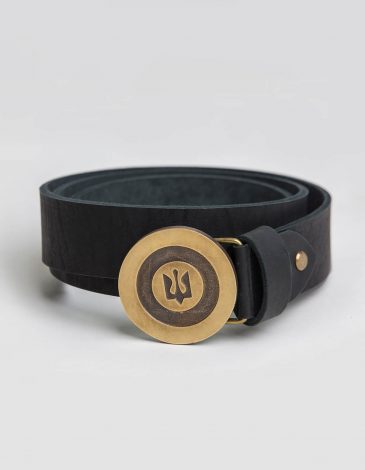 Aviatsiya Halychyny
AH_9631ade6-1b0e-11e8-a20c-0cc47a40fa97 To complement your look, we have a leather belt with a metal buckle. The buckle with a roundel picture. The length of the bely can be adjusted. 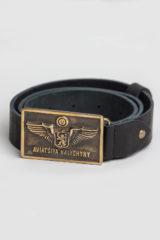 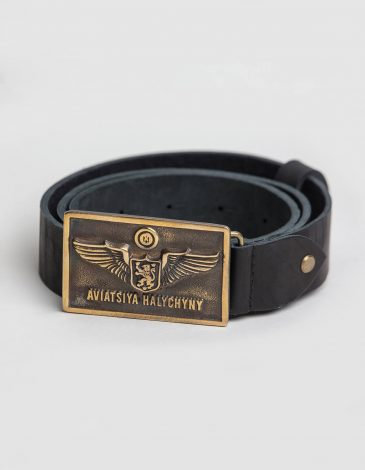 Welcome to the store at which you can buy a belt in just two clicks. And this belt will not only bind the waist and hold up the trousers, but also accent your style.

The first belts did not use to look as good as they do now, as the materials from which they were made used to be grass, hair or pieces of leather. Only after thousands of years did the belts begin to acquire an aesthetic appearance. They started to be made from cords, fabrics and ropes, which were braided or sewn together; the finished product was called a “belt”.

The tradition of wearing leather belts in Ukraine dates back to distant Scythian tribes. They were the first to deftly process leather and deal with metals. In Kyivan Rus, this item of clothing was very important, as tearing off someone’s belt was considered an act of hostility. The belt had a status role, signified dignity and honor of its owner. No wonder the belt was a mandatory element of military uniforms. Throughout history, belt undertook different functions. It was used as an element that holds up weapon, as protection for the belly and even as a device for driving away evil spirits. But over time, it was left with two functions only: to hold up the trousers and accent style. Now it has become almost an integral part of men’s clothing and occupies an important place among other men’s accessories.

There’s a great variety of belt kinds; they differ in the types of buckles and materials from which they are made. Men’s leather belts are considered to be the most reliable and impressive. We make our own belts from genuine belt leather made of bull or cow skin, and the buckles are cast from brass.

You can buy a belt at a specialized store. If the belt is too long, then you do not need to look for something to make a new hole. Stores usually have special devices that shorten the belt and do not spoil its appearance.

How to choose a men’s leather belt?

The belt should match the color and texture of the shoes.

A classic buckle is made of brass and has the form of a horseshoe. Such an item will be suitable for all types of trousers.  But if you want to emphasize your individuality and make some accent, choose extraordinary forms and colors.

Leather products always have a cut that confirms the naturalness of the material. Leatherette belts are first rolled up and then hemmed.

The length should fit you. After fastening, there should be 20 centimeters of free end left on the belt. The optimal width is 4-5 cm for an adult male.

Never wear a belt with suspenders; it is considered a mauvais ton.

If you are looking for a leather belt in Lviv or any other city, be sure to pay a visit to our store or order online.