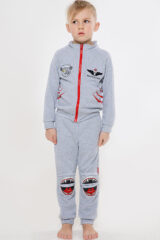 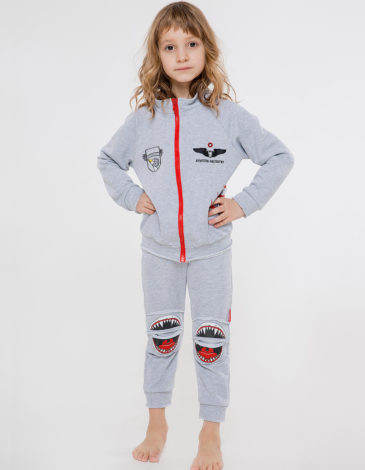 Aviatsiya Halychyny
AH_17252fbf-552f-11e9-a21a-0cc47a40fa97 Even the shark is flying in aviation. The military often depict it on their aircrafts. Perhaps, to seem more intimidating and to terrify the enemies with sharp teeth. The jacket with a zipper on front side is decorated with a chevron of “Telesyk airlines” and a logo of Aviatsiya Halychyny. There is a picture of shark’s gill on the sides. There are three-dimensional fins of the predator on the back. On the knees there are fabric inserts with a picture of a jaw. There is an elastic band on the bottom. 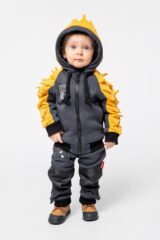 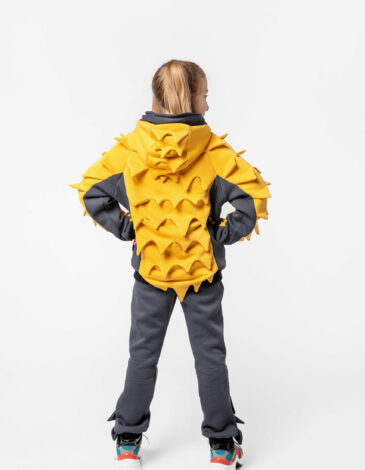 Aviatsiya Halychyny
AH_faf99213-7483-11ec-9ba4-ac1f6b742a2b One of the strangest creatures that still live on our planet. Pangolin is an animal that lives in Asia and can roll into a ball. We dedicated our hoodie from "Always Explore" series to him. But only in hoodie you will not feel like a real pangolin, so we have a set for a complete reincarnation. It is our uniqe "Pangolin" set. It includes children's hoodie "Pangolin" and children's pants that will complete the image of a little researcher. Gray-yellow (mostly yellow) hoodie with imitation scales on the back, hood and sleeves. The hood is deep, with puffs of massive ropes. The hoodie has the Telesyk Airkines and "Always Explore" logos on the chest. Pants have reinforcements on the knees, so would wear more slowly, a belt on puffs, cuffs on the pants and spikes, as all ancient animals had. 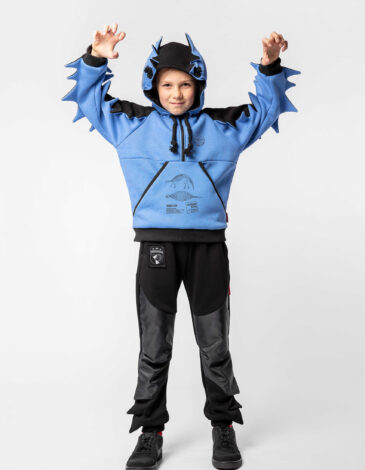 Aviatsiya Halychyny
AH_7d933058-59c0-11ec-9ba3-ac1f6b742a2b We know that children love dinosaurs. And if they love dinosaurs, they will definetly like our hoodie. And if they like hoodie, then they will definetly like the pants too, because without it it is impossible to feel like a dinosaur completely. So, now we have a set for little connoisseurs of Nodosaurs - hoodie and pants together. Blue and black hoodie Nodosaurus, as it should be, with spikes on the sleeves and hood, and a printed story of Nodosaurus on the front. Pants have reinforced knees and spikes as all ancient animals had. 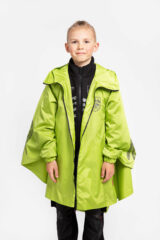 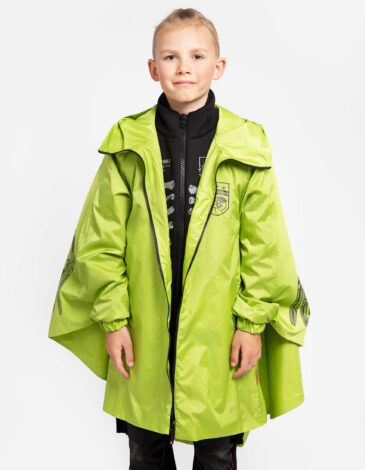 Aviatsiya Halychyny
AH_65ef6245-b965-11eb-a236-0cc47a40fa97 What is an Archaeopteryx? Our cool kids’ set consisting of a coat and a sleeveless jacket will tell you about it. Archaeopteryx is the great-great-great-grandfather of the goose and other birds. Archaeopteryx is an archaic bird that existed a long time ago on our planet. Now you can stretch the feathers (or rather, the arms in the coat) and the wings behind your back will spread. Bright color will help you keep your kids in sight from afar, either in the forest, the field, or in the city. The name of the series “Always explore” is placed on the chest. There is a logo of Aviatsiya Halychyny on the back.  Sleeveless jacket created with imprinted bones of the archaic bird and a few interesting facts about it to match the raincoat. The sleeveless jacket will keep the kids warm and cozy. Now it is possible to explore the history of “feathered aviation” even since childhood :) 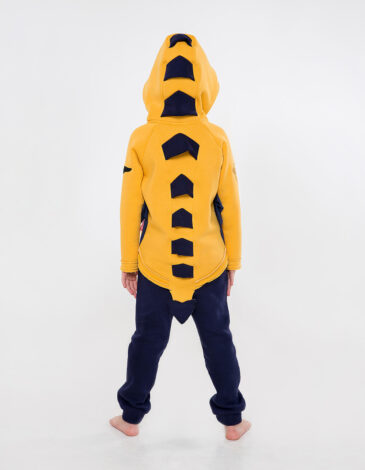 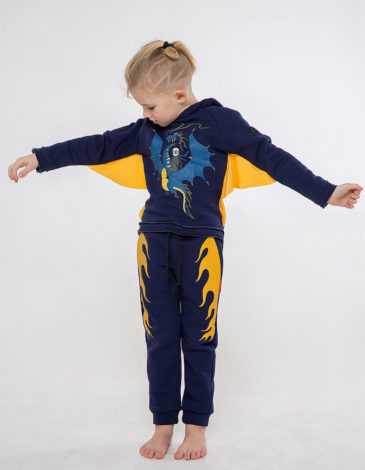 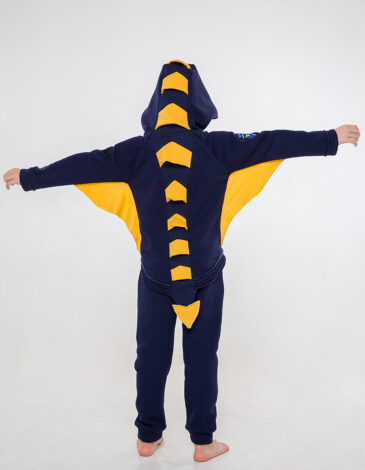 Tracksuits, especially children’s, are becoming more and more popular in the world of fashion every year. And if earlier these clothes were only used for sports, from the end of the 20th century they came to be seen as a full-fledged element of subculture, casual, and even glamorous fashion.

When and how did tracksuits for children appear?

Mass enthusiasm for sports in Europe (not including Ancient Greek traditions) began in the 19th century after the bicycle was invented. Later, following bicycle trips, an increasing number of people became interested in swimming and yachting. It was the time when such games as volleyball, football, rugby, cricket, tennis, horse polo, and archery, as well as ice skating and skiing, became popular.

All these sports activities certainly required comfortable clothes that would not get in the way or restrict movements, but instead would allow one to feel free. Since comfort has now become more important than spectacular design, manufacturers did not hesitate to create suitable clothing options. This is how the first tracksuits (or rather their prototypes) began to appear.

At first, only the men’s version of sportswear was produced, but later it became clear that for such sports as tennis or cricket a sports suit for girls should also be made. After all, even at the beginning of the 20th century, there were not only men’s but also women’s sports clubs that were engaged in cycling, tennis, and cricket.

Initially, the children’s tracksuit appeared in private educational institutions in Europe, in privileged schools for boys and girls. Over time, they could also be seen in colleges and universities. In such schools, a lot of attention was paid to sports, and the sports activities of girls and boys required different versions of sports clothing to be produced.

At first, these were not very comfortable clothes (by modern standards). Mostly, the first sports uniform for boys consisted of a woolen sweater, shorts or loose pants, socks, and sports shoes. In sportswear for girls pants and shorts were replaced by a skirt. But compared to a jacket or a blazer these kids’ sports suits were usually much more comfortable.

A new stage in the development of tracksuits took place in the United States. Here in the 1930s, thanks to the development of baseball and American football, such a simple, comfortable, and well-known element of sportswear as a sweatshirt appeared. A thick cotton long-sleeve t-shirt was much more comfortable and practical than the woolen sweaters that the teams used to train in before. And youth leagues led to the appearance of children’s tracksuits of new comfort and quality. Girls and boys could run and hit the balls much more efficiently.

However, the real boom in fashionable tracksuits happened in the 1980s, during the rise of hip-hop culture. Thanks to it stylish tracksuits for boys and girls appeared, bright and monochrome, for everyday walks or even for performing on stage.

If we talk about how children’s tracksuits appeared in Lviv it is worth mentioning the sports association “Sokil” that existed here before World War II. It was probably the largest sports association in Western Ukraine at that time, so the sports uniforms for boys appeared in our area almost simultaneously with the rest of the world. And another stage, a later one, played an important part. It was the youth league of the “Karpaty” football club where children also needed comfortable and high-quality uniforms.

Children’s tracksuit: where to buy?

Recently, Ukrainian manufacturers have begun to pay more and more attention to children’s sportswear. Aviatsiya Halychyny is no exception. We make comfortable and practical children’s tracksuits that make you warm even when Lviv is traditionally covered with heavy rain. We have developed interesting sportswear models that will not only make you warm and comfortable but also tell an interesting story. You can buy children’s sports suits on our website or at the store.