7th Tactical Aviation Brigade named after Petro Franko is an regiment of the Air Force of the Armed Forces of Ukraine that was established in 1992. Till 2003 they had been a bomber regiment but later on they were reformed into a brigade. It is stationed in Starokostiantyniv town, Khmelnytskyi region and they fly with Su-24. The Brigade participated actively in the struggle in the East of Ukraine. They made more than 150 sorties in the Luhansk region to counter the enemy.

On March 28, 2008, President of Ukraine V. Yushchenko issued a decree naming the brigade after Petro Franko, a prominent figure in the Ukrainian Revolution of 1917-1921. As it is clear from the last name, Petro is the son of Ivan Franko. The Brigade received this particular patron as he was a military pilot of the UGA (Ukrainian Galician Army). On December 6, 1918, Dmytro Vitovskyi signed an order on the formation of the Air Force Department of the Galician Amy. Petro Franko became the commander of the department.

Since 1918, commander Petro Franko had been leading the office of the Air Force in the Command office of UGA until its internment in 1920. In addition, he is the founder of “Plast”, but that’s a different story. So, the Brigade are still flying under the patronage of Petro Franko and protecting our borders from the sky almost from the moment of obtaining independence. 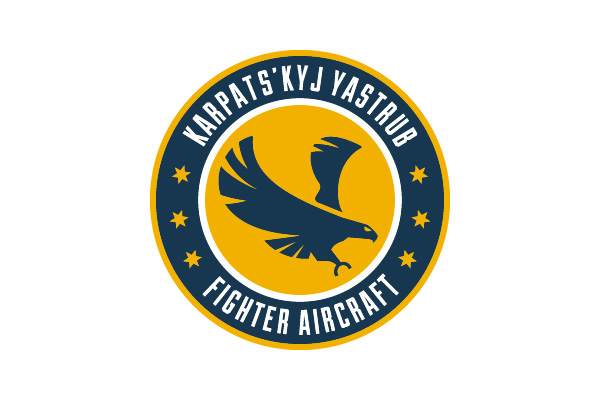 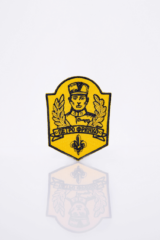 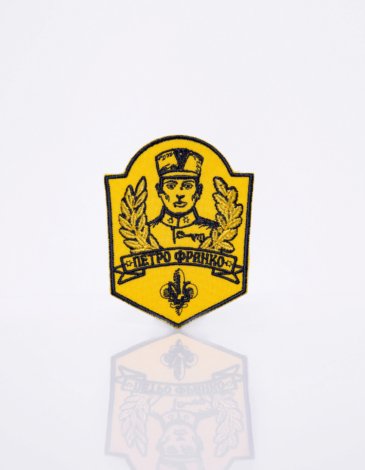 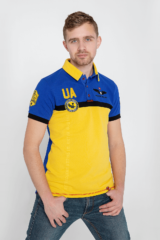 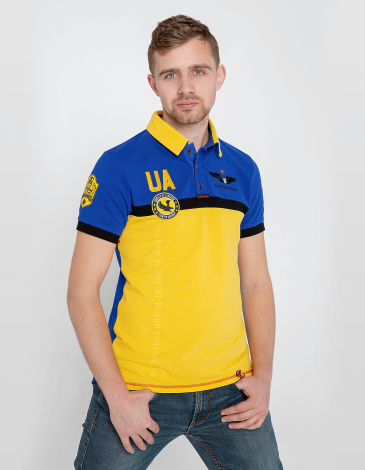 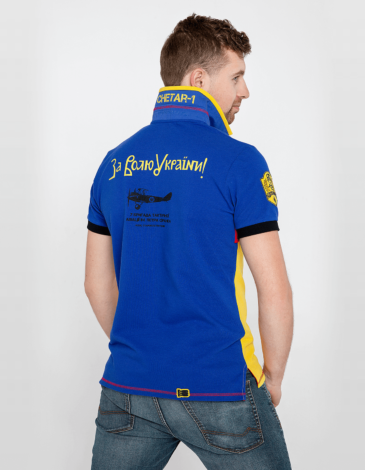 Aviatsiya Halychyny
AH_0fe9627d-8a8f-11e8-a20f-0cc47a40fa97 A true men’s polo – bold, stylish; it gives extra decisiveness and strength. On the left side of the chest there is an embroidered logo of Aviatsiya Halychyny and the Brigade’s chevron, as we see it – with a Carpathian hawk, which fits the fighters. There is a printed inscription “Літунський курінь імені Петра Франка” (“Petro Franko Aviation subdivision”) below. On the back there is a large print with the motto “За волю України” (“For the freedom of Ukraine!”), written in an authentic font, the same as on UGA aircrafts 100 years ago. Also, a Nieuport aircraft is depicted – this aircraft was the basis of the UGA air force. There is a patch with aerial bombs below. On the right sleeve there is a chevron with the portrait of Petro Franko, the founder of Ukrainian aviation and a co-founder of “Plast” (that’s why there is a lily – the symbol of “Plast”). On the left sleeve there is a chevron with the Brigade’s number and a hawk. A star with six rays is a sign of the military rank “chetar” (“junior officer”) – Franko’s military rank. That’s why this inscription is also found on the collar’s back; traditionally for our polos, there is also the location coordinates of the Brigade (49°44’43’’ N 27°16’09’’E) On the sides there are slits for easy putting on. There are also convenient ventilators of contrasting color. There is a loop for glasses below the fastener (so the polo is perfectly comfortable). There is a stripe with a lion on the bottom so that everyone knows in which city our clothes are born. On the left in the seam there is a label “Proudly made in Ukraine”, as we are proud of what we do. See more men's polo shirts in the catalog 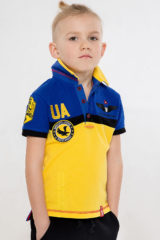 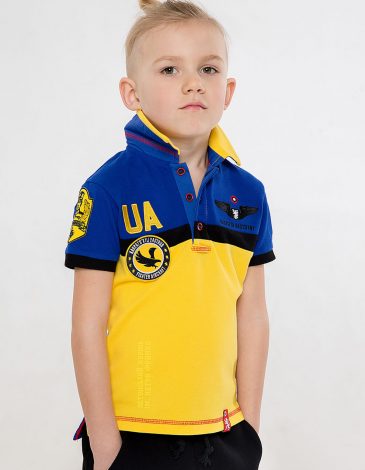 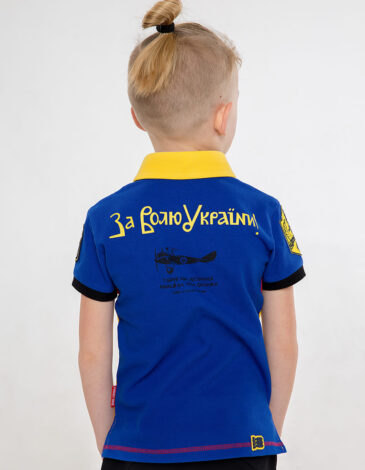 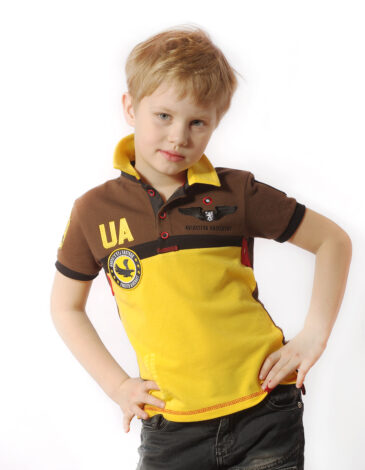 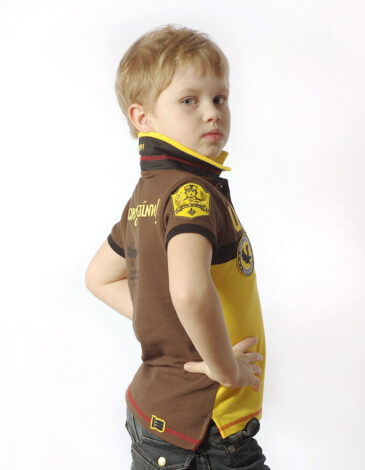 Aviatsiya Halychyny
AH_77602d2f-8a98-11e8-a20f-0cc47a40fa97 Kid’s polo comfortable for fooling around, going to school or a kindergarten; it  is even suitable for a birthday party of your beloved grandmother. For all occasions of children’s life. In addition, it tells about “Plast” and a bit of history of Ukrainian Army. In addition to our logo, there is a chevron with an attacking bird, i.e. the symbol of our defenders, on the chest. A huge print “За волю України” (“For the freedom of Ukraine!”) covers the entire back; the print is similar to what pilots once had on their aircrafts (one of the aircrafts, the Nieuport aircraft, is also depicted on the polo). A lily, i.e. the symbol of “Plast”, and the portrait of Petro Franko, the son of Ivan Franko, are depicted on one sleeve; a graceful bird with the Brigade’s number is depiсted on the other sleeve. On the back bottom there is a stripe with bombs that were once used by Ukrainian military pilots. On the collar there is the military rank of Petro Franko and the exact coordinates of the Brigade’s location (49°44’43’’ N  27°16’09’’E).. On the bottom there are slits for comfort and a lion as a decoration; there are also ventilators for you not to perspire even during the most bustling games.  See more kids' polo shirts in the catalog 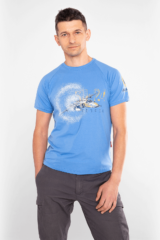 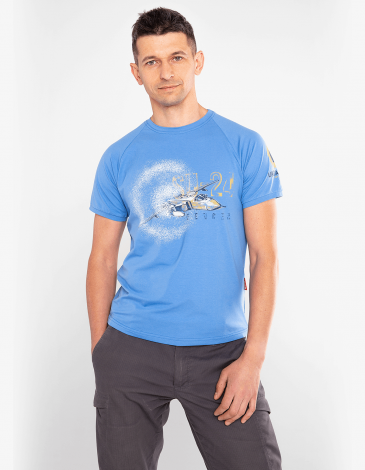 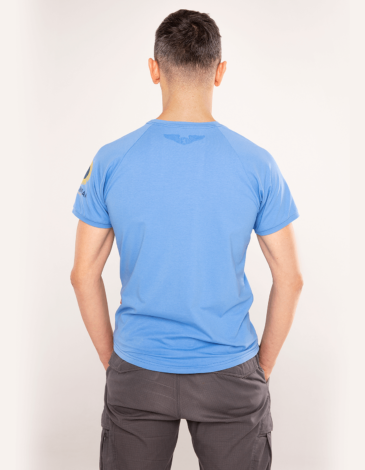 Aviatsiya Halychyny
AH_96809488-0625-11ea-a225-0cc47a40fa97 Petro Franko would like Su-24. These are no wretched Nieuport aircrafts. A comfortable men’s T-shirt for work or rest. The print, in fact, incudes the inscription “Su-24” and an image of the aircraft itself. On the back there is the imprinted logo of Aviatsiya Halychyny. On the left sleeve there is the roundel in the colors of the Ukrainian flag and an inscription “Ukrainian Air Force”. See more men's t-shirts in the catalog 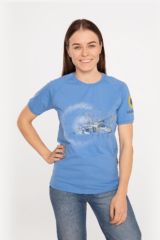 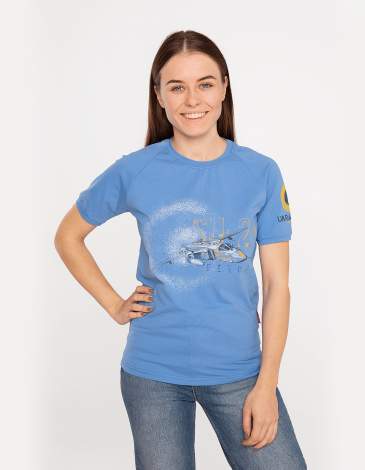 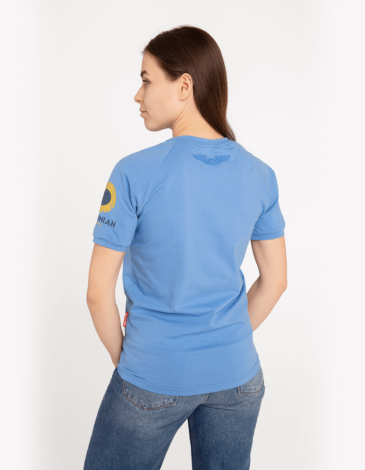 Aviatsiya Halychyny
AH_636310fa-0625-11ea-a225-0cc47a40fa97 Su-24 is a powerful and graceful aircraft, so it suits women as well as men. Women’s T-shirt is a little looser so as not to hinder movements, but no less feminine. An imprinted aircraft and a caption to it are huge as it is a true reason for being proud. Traditional elements for our clothes are a red label in the side seam and a yellow and blue roundel, i.e. the symbol of Ukrainian Air Force.   See more women's t-shirts in the catalog 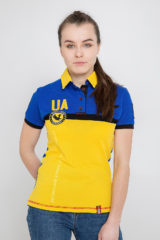 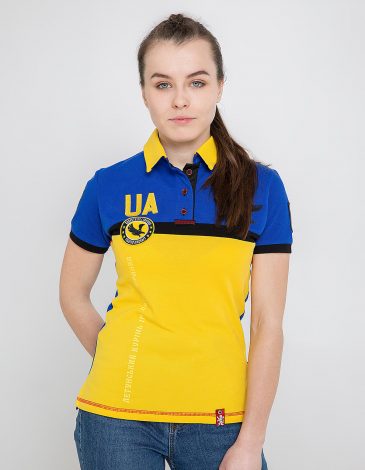 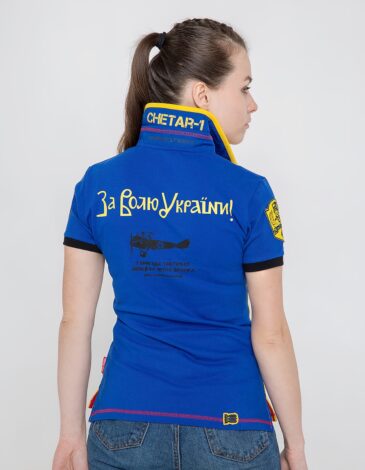 Aviatsiya Halychyny
AH_097df313-8a97-11e8-a20f-0cc47a40fa97 A comfortable slim fit women’s polo, reserved and elegant at the same time. On the chest there is a logo of Aviatsiya Halychyny and the Brigade’s chevron slightly impoved by us – with a fierce Carpathian hawk well suited to the fighters in spirit and mood, and, for sure, the inscription “Літунський курінь імені Петра Франка” (“Petro Franko Aviation subdivision”) On the back there is the print “За волю України” (“For the freedom of Ukraine!”) which is probably the most sincere and topical motto for all times. There is a chevron with the portrait of Petro Franko decorating the right sleeve that is embellished with a lily, i.e. the symbol of “Plast”, as he is a co-founder of this organization. The left sleeve is decorated with one more chevron that depicts a bird in flight and contains the Brigade’s number. Petro Franko held the military rank “chetar” (junior officer), which is depicted in his honor on the collar. There are also ventilators to make the polo even more comfortable. A polo shirt is rather a summer garment so it can’t go without a loop for glasses. A lion (on the stripe) as a symbol of the city where our clothes appeared embellishes the lower front edge. A label “Proudly made in Ukraine” witnesses our attitude to the clothes we create. If you want to find out where the Brigade is stationed, you can just look up the location coordinates on the back side of the collar (49°44’43’’ N  27°16’09’’E). See more women's polo shirts in the catalog 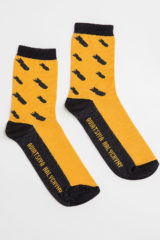 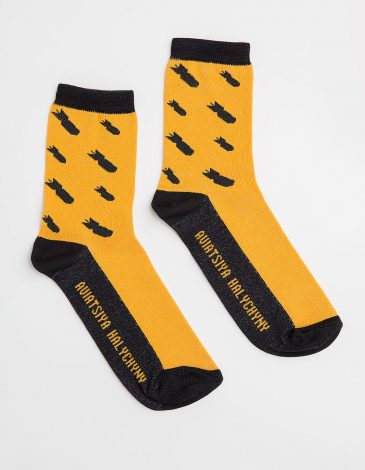 Aviatsiya Halychyny
AH_eee7ca0b-5460-11e9-a21a-0cc47a40fa97 Holy cats! These socks are a real bomb. Even a lot of bombs. ;-) These socks are comfortable and reliable like Ukrainian aviation. They wear well and won’t let you down on combat missions.