A seraph is the highest angelic rank, an angel that is the closest to God. The fiery angel is six-winged: two wings cover its legs, two more cover its face, and the other two are used to fly…

When he descends upon earth in the likeness of lightning to ignite love in people’s hearts, a whirlwind of fire rises around him. Seraph disseminates love for the Divine. It brings enlightenment and ignites in people the fire of love and thirst for life. 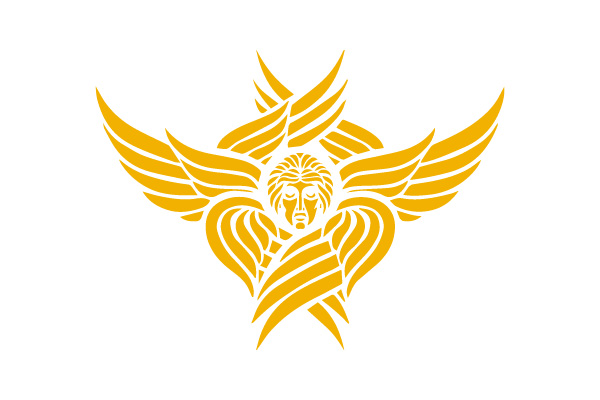 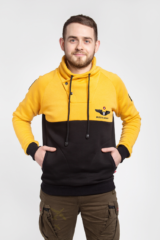 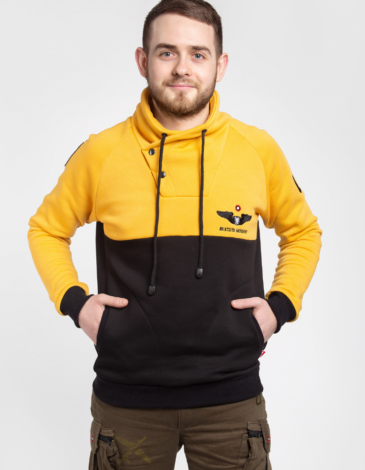 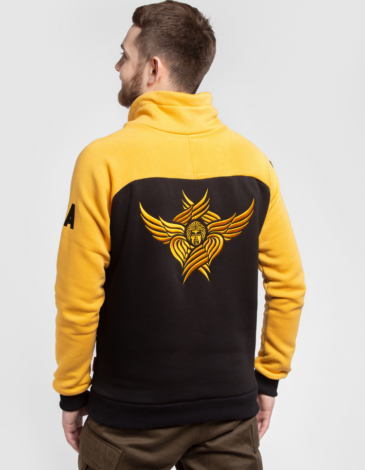 Aviatsiya Halychyny
AH_2c669a18-8a95-11e8-a20f-0cc47a40fa97 We decided to return to one of our classic models of sweatshirts — the yellow and black men’s sweatshirt “Seraph”. On the back there is large gold embroidery depicting a seraph by artist Andriy Yermolenko. The sweatshirt is quite minimalistic in decoration: except for the main embroidery, there is only a patch “UA” on the sleeve and our logo on the chest. The high comfortable collar makes the sweatshirt even warmer, and the drawstrings — more practical. It’s the clothes that protect (in all senses). Important: the buttons on the collar are decorative. See more sweatshirts for men in the catalog 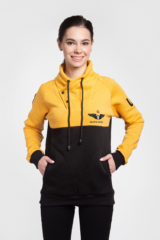 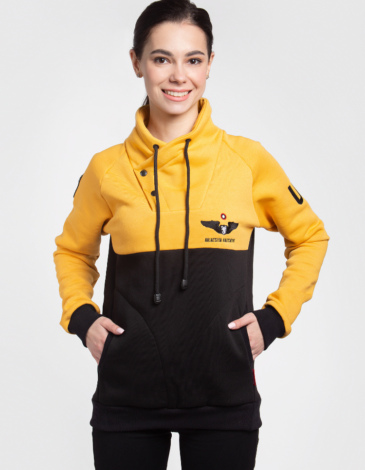 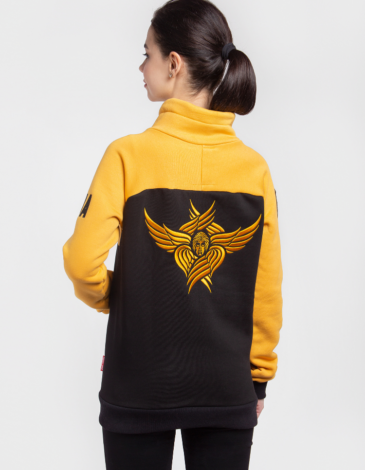 Aviatsiya Halychyny
AH_b5e56e0b-6523-11ea-a22b-0cc47a40fa97 Everyone needs a guardian angel. We have a sweatshirt with the most powerful angel — the seraph (picture by the artist Andriy Yermolenko). Generally, this is a quite reserved black and yellow women’s sweatshirt. The adornment is also reserved: there is large embroidery of the seraph on the back; there is an embroidered “UA” on one shoulder and a chevron with a burning sword (a symbol of Seraph) on the other one. On the chest, there’s our embroidered logo. A comfortable high collar can be adjusted with drawstrings and snap fasteners to feel even cozier in cold weather. See more sweatshirts for women in the catalog 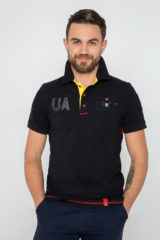 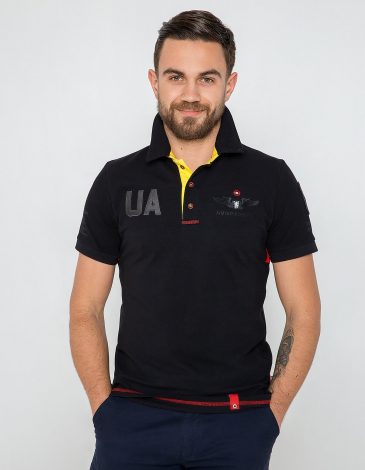 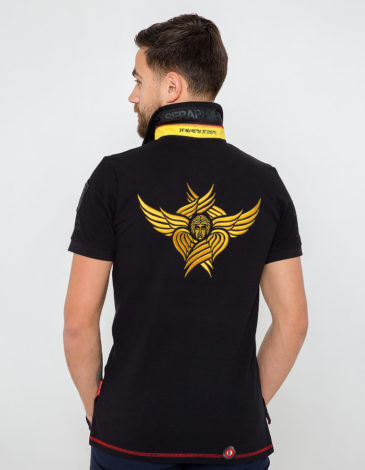 Aviatsiya Halychyny
AH_eb246026-8a8d-11e8-a20f-0cc47a40fa97 If you want to have a guardian angel, choose the most powerful one. Reserved and quite ornamented at the same time men’s polo. There is golden embroidery with Seraph by a Ukrainian artist Andriy Yermolenko on the back. There is a patch with the number of the polo series on the bottom. There is a chevron with a burning sword, i.e. the main weapon of Seraphs, and a motto “З вірою в небо” (“Believing in the sky”) on one sleeve, and an imprinted cross and a quote from the book “Corpus Aeropagiticum” about Seraphs on the other one. On the left part of the chest there is an embroidered logo of Aviatsiya Halychyny. On the back of the collar the coordinates of Jerusalem, the holy city, (31°46’45’’N   35°13’25’’E) are placed (as the angels are there). See more men's polo shirts in the catalog 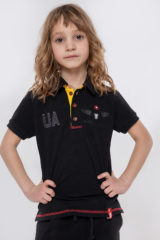 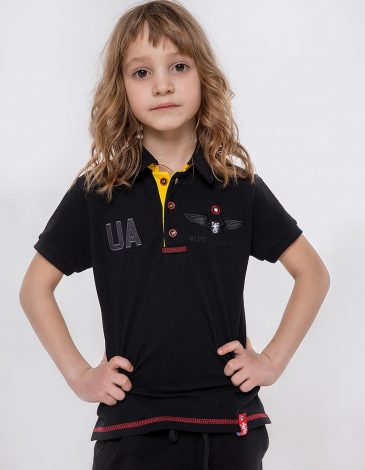 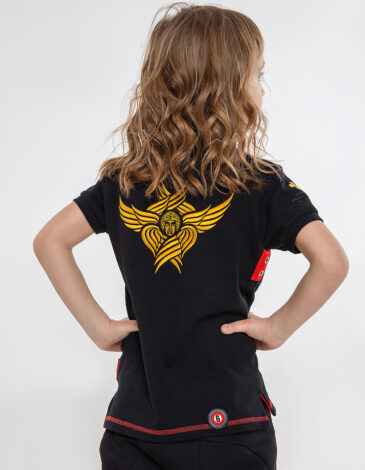 Aviatsiya Halychyny
AH_5abd43f8-8a98-11e8-a20f-0cc47a40fa97 The children need a guardian angel even more. This kid’s polo has large embroidery on the back that depicts a Seraph – one of the most powerful angels. We used picture by the artist Andriy Yermolenko as a decoration of the polo. Apart from this picture and a few bright accents such as a print in the form of a cross on the sleeve and bright yellow lining with fasteners, the polo itself is solid-colored, all the other decorations are prints and embroidery made in the same spirit. Thus right for pesky little kids. See more kids' polo shirts in the catalog https://youtu.be/CGr8DvTgQ_E 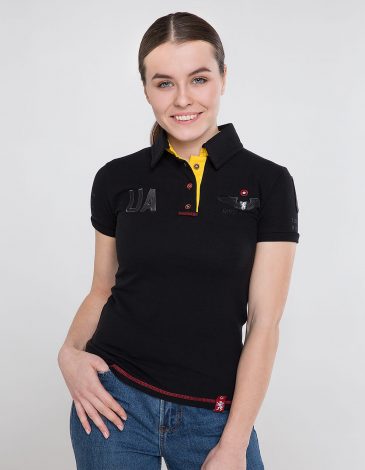 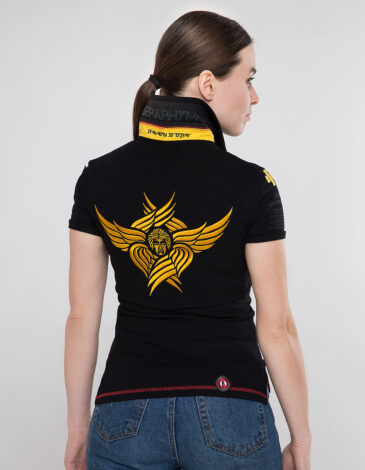 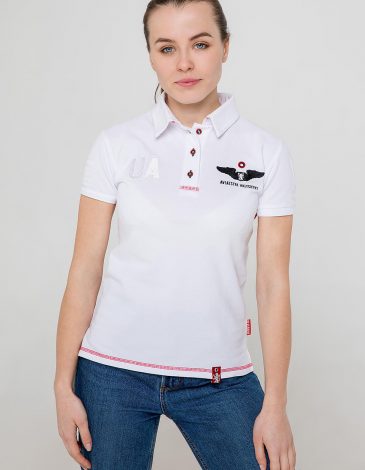 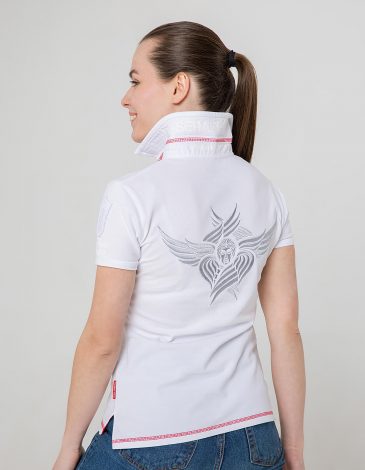 Aviatsiya Halychyny
AH_e73c6e15-8a96-11e8-a20f-0cc47a40fa97 One of the most reserved and at the same time richly decorated women’s polo. The topic itself – the Seraphs – requires a definite style. Yes, the polo itself has few decorative elements, but the central embroidery on the back, painted by artist Andriy Yermolenko, is three-dimensional and embroidered with gold threads (or silver, depending on the color of the polo itself). The other elements: a chevron with a burning sword – one of the symbols of the Seraph, the motto “З вірою в небо” (“Believing in the sky”) and a quote from the book “Corpus Aeropagiticum” about these angels and even the patch “UA” on the chest are made in one spirit, so as not to distract from the most powerful and aviation-related angel. See more women's polo shirts in the catalog